The Decade Closes With a Flourish

Champagne toasts and broad smiles were ubiquitous among the investor class as holiday revelers reflected upon a striking turnaround in sentiment and the markets relative to the same time last year.  All of the major equity indexes marched to new heights in 2019, and bonds rallied concurrently, driving stellar investment returns across the spectrum.

The stock market shrugged off significant trade and geopolitical concerns earlier in the year, defying the predictions of many experts that the U.S.-China trade conflict and a coincident downshift in growth would bring the longest-running bull market to its knees.  Despite the tricky macroeconomic backdrop, the price of the S&P 500 finished the year up 29%, its best year since 2013, while the Dow Jones Industrial Average rose 22% and the Nasdaq gained 35%.  Elsewhere, stock indexes in Brazil and Germany posted gains of more than 20%, as the Stoxx Europe 600 index rose 23% and the Shanghai Composite added 22%.

Fueling the charge was the Federal Reserve’s stunning reversal from December 2018’s tightening program:  flush with lower interest rates and greater liquidity, the equity markets eventually dismissed bad news with more regularity and powered higher as a Phase I trade deal with China came into focus in the last quarter of 2019.  Interestingly, that’s when the equity markets started reaching new highs, returning 9.1% during the last three months of the year, eclipsing the former peaks set in 2018.  Semiconductor manufacturers and other technology firms (especially massive ones like Apple and Microsoft) were the ones most responsible for pushing the S&P 500 to dizzying heights, as the S&P is a market capitalization-weighted index (which means the largest companies carry the most sway; the index goes as they go).  None of which is to suggest that the rally was particularly narrow, however, as roughly 90% of the companies in the S&P 500 were at least nominally positive for the year; though energy firms, as a group, were the worst performing sector.

The other major driver of equity prices was a surprisingly steady drumbeat of increasing corporate earnings, layered on top of incredibly profitable results in 2018.  Even though the rate of earnings growth slowed, the sharp contraction many prognosticators had predicted failed to materialize.  Blue chip corporations continued to issue debt on favorable terms, allowing them to buy back shares of their own stock, a technique which we view dimly and caution investors to consider unsustainable in the long term.  Indeed, investors became more discerning in 2019, forcing several bond issuances to fail and penalizing several new companies with poorly-executed initial public offerings (IPOs).

Wall Street is famous for its handwringing, as investors must continually climb the infamous “wall of worry” to overcome fear.  U.S. economic growth continues to advance, due partly to the power of recent tax cuts, but also due to remarkable resilience of the American economy.  GDP is humming along at 2.1%, while inflation remains near the Fed’s target of 2%.  Workers are enjoying wage gains of 3% on average, with the largest gains flowing to employees on the lowest rungs of the economy.  According to the Bureau of Labor Statistics, over the past 11 quarters wages for the bottom 10% of earners over the age of 25 have risen at an average annual rate of 5.9%, and wages for workers over 25 without a high school degree have risen an average of 6.1% annually.  We view this dynamic as a positive development (though long overdue) as these individuals occupy the most precarious positions and almost certainly spend every additional dollar they earn, which in turn supports the broader economy.  As evidence, the Wall Street Journal reports that in 2019, 40 million fewer people lived in households receiving government assistance than in 2016, and the number of people receiving food-stamp benefits has decreased by 9.5 million over the past three years.

A full assessment of the labor market requires us to drill beneath the top-line employment statistics, however.  The recent uptick in wages for the lowest-skilled and lowest-wage workers in our economy, while a positive, barely moves the needle to help them close the (minimum) wage gap relative to lost purchasing power over the years.  Capitalism always has winners and losers, and those who are left behind often pay a heavy price.   Although it has been a long time coming - and there’s certainly more to be done - it’s good to see the poverty rate among minorities at the lowest levels ever recorded. 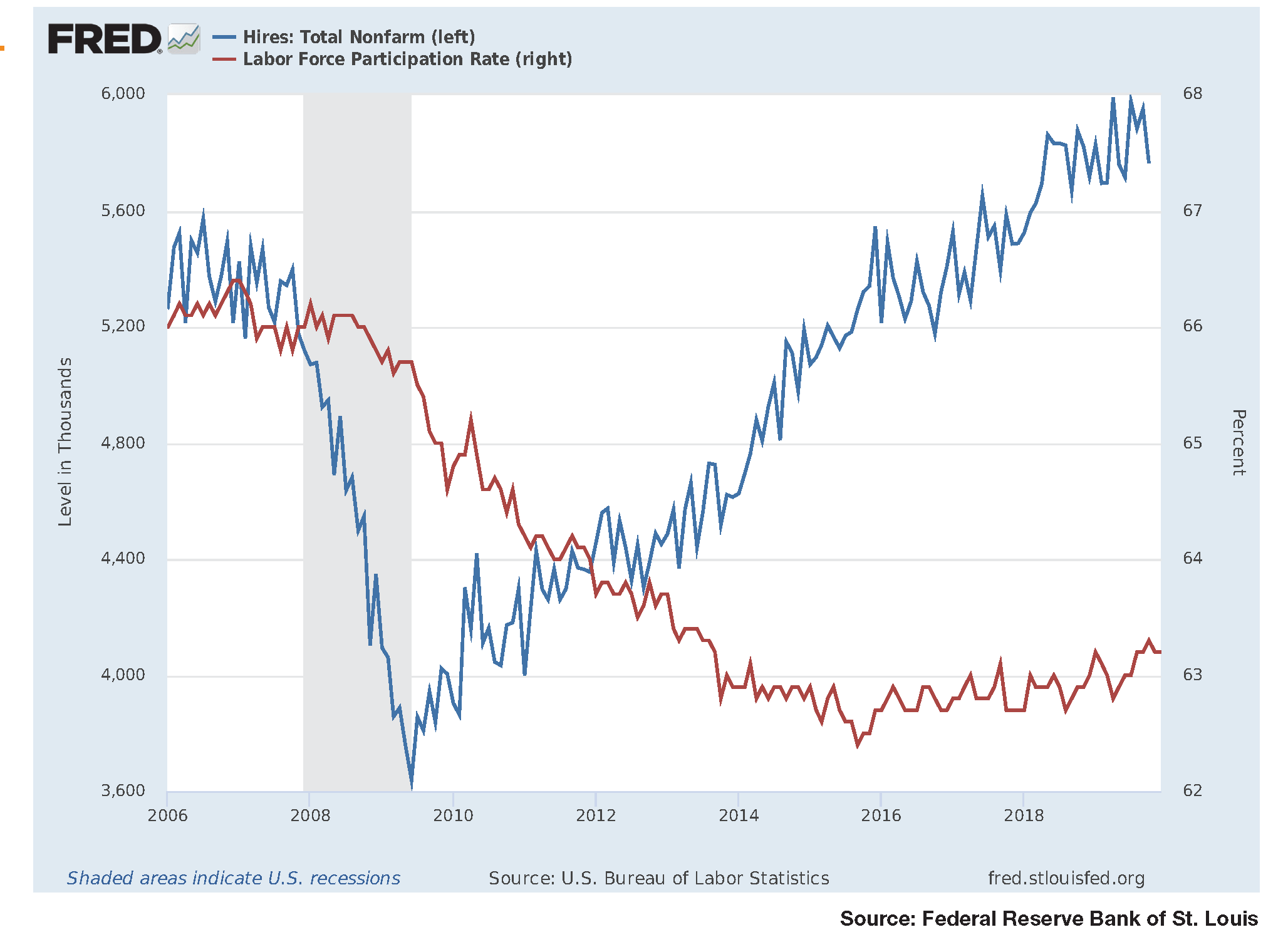 2019 was the 10th consecutive year that employers added net jobs to the American economy, which is a record.  In the last decade, the U.S. added 22.6 million jobs, which stands in stark contrast to the 2000’s, when the domestic economy lost nearly a million such positions.  Not surprisingly, unemployment now stands firmly at 3.5%, a 50-year low, and the important labor participation rate is holding steady at its recent high (63.2%).  The strength of the labor market sets the stage for continued economic growth in 2020.  In addition, consumer confidence appears to have bottomed and started moving higher to close out the year.

There are pockets of weakness, however, and some economic indicators are showing strain.  The ISM Manufacturing Index is grinding lower (presumably due to the uncertainty caused by protracted and contentious trade negotiations), dropping below 50 in August and slipping down to 47.2 in the most recent survey.  Large companies like Harley-Davidson, AT&T, and Target are slowing down or delaying planned spending on equipment or other capital investments, which in turn could act as a drag on economic growth.  Although most companies haven’t publicly tied their cutbacks to trade, the timing of them (starting in the third quarter of 2018, the same period the U.S. and China began imposing meaningful tariffs and threatening more) is difficult to dismiss.  Further, business sentiment surveys conducted by the Federal Reserve (Atlanta, in this case) showed that 12% of companies surveyed – including 20% of manufacturers – decreased or delayed capital spending in the first half of 2019 because of trade tensions and concerns over tariffs, a sharp jump since the first half of 2018.  While some of the deferred investment will come back, some of it never will, and that represents a loss to our overall economy.  We can only hope that the year-end market runup, which is largely a response to a recent lessening of trade tensions, is not premature.

What does it mean?

Heading into 2020, we see both the U.S. and global economies in a deceleration phase.  Manufacturing weakness is hard to ignore, and the effects of the trade war are still rippling through business confidence and capital expenditures.  That said, consumers generally remain strong worldwide.  With China seemingly finding a bottom as the prospects of a trade deal reverberate there, and central banks worldwide providing more accommodation, we take the view that we are in a late-cycle slowdown, rather than on the verge of a recession.  As we pointed out six months ago, global weakness in and of itself is not what causes the U.S. to tip into contraction.  Recessions which start in America can pull the global economy into a downturn, but the reverse has not proven to be true.  The health of the domestic labor market is now – directly and indirectly – providing inertia and support to the world.

Looking down the road

Stocks, by any measure, are no longer inexpensive.  The bull market is in record territory, not just in valuation but also in duration.  Investors still remember the financial crash and subsequent Great Recession, so they remain skittish and willing to lock in profits on any negative news.  Combining the human behavioral aspect with the directional inertia that high-frequency traders and their algorithms have introduced to the markets, we can confidently predict that volatility is likely to continue into 2020.

Largesse from The Fed and other global central banks (in the form of low and stable interest rates, balance sheet expansion, and other technical operations) should calm investors’ nerves and serve to ultimately dampen volatility, even as markets exhibit high sensitivity to the news cycle.  The Fed’s pivot to a dovish policy has been validated by low inflation and therefore continued monetary support.

Six months ago, we wrote the following to you in this publication:

“A legitimate trade agreement with China, however, would be the precise catalyst the stock market needs to power ahead in 2019 and achieve new heights.  We remain vigilant and cautiously optimistic.

That perspective and patience has been rewarded.  Although the Phase I trade deal (which is pending as we go to press) is unlikely to solve the longer-term issues which bedevil U.S.-Sino relations, particularly the structural reforms needed to remedy intellectual property theft and forced technology transfer, we view even a basic agreement as a symbolically important step.  It should provide executives and decision makers more visibility with respect to the terms of future trade, therefore enabling them to strategically invest and deploy more capital for the long term, a fundamental boon to our economic prosperity.

Therefore, we approach the markets this year with an appreciation that opportunities will continue to present themselves, but we need to be rigorous and precise and not count on a rising tide to lift all boats.  Security selection will be especially important, and our bias toward quality should be a meaningful offset against the volatility we expect.  Election years tend to favor equity investors, with 17 out of the past 19 cycles showing gains in stock prices in the twelve months leading up to the election itself, with an average return of 8%.  Even if we don’t quite get to that figure in 2020, any broad gains and firming of support on top of 2019’s tremendous run would be welcome.

In closing, we always appreciate the confidence you have placed in us as your trusted advisor.  We are focused on the markets and are dedicated to serving you.  Our capabilities in the area of planning and financial modeling are increasing every year, and we would welcome the opportunity to meet with you to refresh our understanding of your current status and demonstrate the value of our insightful advice.

We remain committed to providing an exceptional level of service to our clients. Our secure online portal enables clients to quickly access their account information. Eliminating mailed account statements allows you to get your account information more quickly, reduces the need for filing paper copies and also helps the environment by eliminating waste.