In 2007, Nassim Nicholas Taleb wrote a fascinating book on the extreme impact that statistically rare and unpredictable events have. Published virtually on the eve of the financial crisis which brought the global banking system to its knees, The Black Swan: The Impact of the Highly Improbable spent 36 weeks on the New York Times best-seller list.

Twelve years later, another seismic threat to the global economy started brewing in the wet markets of Wuhan, China, as an infectious bat introduced a wildly transmissible virus into our highly networked human society. Life will never be the same, as the invisible foe has brought the entire modern world to a self-imposed halt. The longest-ever bull market and the attendant global growth story were rendered moot in a matter of weeks.

Clearly, there are many lessons to be learned as we re-examine interconnected supply chains, biodefense preparedness, and our collective investment in public health. Acknowledging that there will much to dissect and report on those topics in the coming months and years, we will leave that discussion for another time.

Rather than gaze overlong in the rear-view mirror, we feel compelled to put our focus squarely on the road ahead and keep our perspective looking forward through the windshield. What follows is our best assessment of how GDP and earnings might look in future quarters, and the implications for investment portfolios. We must also contemplate what has changed globally since our last such report to you (January) as many economies - in both emerging and developed countries - are no longer in a position of strength. Most of them are handicapped with much weaker banking and financial systems than we have here in the U.S. Even though emerging markets are imposing similar economic shutdowns as we are, their central banks are sadly unable to couple those actions with anything close to what the Fed has done here in America.

Recessions and The Markets

There have been 14 recessions in the U.S. since 1928. We are now squarely in the 15th. Recessions historically end when economic activity troughs, and the stock market nearly always bottoms out before the recession ends. Markets are coldly impersonal and generally insensitive to the human side of a crisis—the loss of life or employment, the pain and angst that is being felt around the world as families try to endure and carry on and eventually return to some semblance of normalcy. Financial markets are simply processors of economic data, with the sole focus of quantifying a value on corporate earnings, in good times and in bad.

Presently, the markets have virtually zero visibility regarding what earnings might look like in the second and third quarters of this year… because, as of this writing, most corporations have withdrawn any future guidance on earnings (and rightfully so). Management teams are driving blind, and beyond the first quarter they simply don’t have a handle on what their business prospects will look like. It’s important to remember that most were performing well just a few short weeks ago, and this has been a government-mandated shutdown. It’s not as though all of these companies were circling the drain with failing business models and poor financials.

First quarter earnings announcements will begin to be released this week, and with them the attendant conference calls with industry analysts. In normal times, the questions raised by analysts are driven by their desire to fine tune an earnings estimate as precisely as possible, because that’s how they are judged and compensated. This quarter’s calls will be much, much different. We suspect that the questions will be much more qualitative in nature, with careful attention being paid to management’s tone and what they are seeing on the ground in their respective businesses. Balance sheet questions will be forefront, as staying power through this crisis will be a paramount concern for many companies.

Nevertheless, we think we should be able to glean a fair amount of information and perspective from these calls and what each firm’s outlook is beyond the third quarter of 2020. Taken together, the resulting mosaic should provide valuable context for the next several months. After the valuation hit for lost revenue and earnings in 2020 solidifies in the short term, stocks prices will eventually start to reflect the earnings per share expected in 2021.

Markets have been desperately seeking any good news to latch onto, so it’s not surprising that any positive anecdotes regarding “curve-flattening,” potential treatments and vaccines are met with enthusiasm. Equity markets have reacted strongly in recent days, with the S&P 500 actually entering what many are seeing as a new bull phase. We remain reluctant to declare a new bull market at this juncture, and think it is still possible for the markets to retest the lows of March 23rd.

Three Scenarios and How We Are Positioned

Even with apparent progress in flattening the curve of COVID-19’s progression, uncertainty is the new watchword for the time being. We expect severe volatility in the markets to continue until we acquire more precise data on the track of the virus, and clarity with regard to when the economy can start to re-open. It’s difficult to overstate the importance of a new rapid testing kit from Abbott Labs, which should meaningfully help slow the spread. Identifying carriers of the disease while they are still asymptomatic will be vital to state by state re-opening of businesses, relaxing physical distancing, and rebuilding readiness.

It goes without saying that there will be a sharp and painful impact to economic output in the second quarter of 2020. Looking past the summer, however, we see three possible outcomes for the economy, and they are dependent - at least to a degree - on how we respond as a country. While some may hope for the best case (all lost economic output fully made up when containment measures are lifted), we think it’s highly unlikely to come to fruition. It’s hard for us to envision a scenario in which American consumers, as voracious as they are, make up for all the lost spending (think meals and travel and shopping) that they are presently foregoing. Similarly, we think the worst case – a scenario where all output is permanently lost, and growth is permanently impaired – is also unlikely.

Our expectation is that we collectively end up somewhere in the middle – the economy eventually returns to pre-pandemic GDP levels within a couple of years, but with only a partial recovery of lost output in the meantime: the spending and output which is lost during the shutdown is not fully recovered in subsequent quarters, but life goes back to “normal.” We expect stocks to begin discounting this middle scenario as we grind past the assuredly bleak news flow of the second quarter, and markets look ahead to earnings in 2021. We suspect that many global and emerging economies will not fare as well the United States, so we have done some repositioning in portfolios toward a more U.S.-centric focus on assets we want to hold through this challenging time.

The cancelling of March Madness reminded us that top-seeded teams lose only 0.7% of the time to a Cinderella squad; teams ranked in the bottom two have won only nine games in the entire history of the NCAA men’s tournament. So it is with investing. We believe it is absolutely critical to have a grouping of the top-ranked contenders in your portfolio. You don’t need to be right 100% of the time, but staying with quality companies and rotating out of those which fail to consistently maximize free cash flow is a proven formula for success.

We note below that historically, large intra-year declines like what we just had are usually followed by sharply positive calendar year returns. 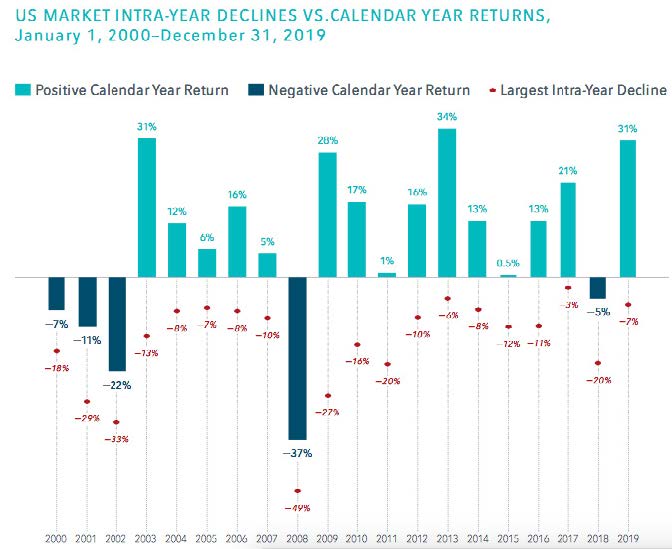 Times like this are truly extraordinary, and we acknowledge that the financial work we do for you is of secondary importance to your personal health and safety. But even though we cannot predict exactly what will happen next, or exactly when the epidemiological situation will improve, we know that it eventually will. We remain vigilant and accessible to answer any questions you may have, because at the very core of our relationship with you is the personal connection. You are the reason we do what we do.

And so, we wish you and your family good health. Be sensible and be safe. We’re going to get through this, together.

We remain committed to providing an exceptional level of service to our clients. Our secure online portal enables clients to quickly access their account information. Eliminating mailed account statements allows you to get your account information more quickly, reduces the need for filing paper copies and also helps the environment by eliminating waste.